History of the breed

produce faster-growing hybrids, Tamworths were not considered worth “improving”. As a result, 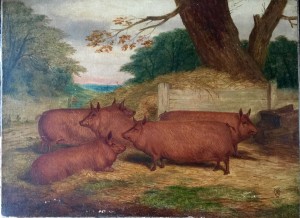 Following the Second World War, commercial breeds took over as farmers were urged to keep more

economical and more productive pigs. Consumer tastes were changing, too, with shoppers demanding

Despite a vast improvement in the number of registered pedigree Tamworths being kept, the breed

is still classed as “at risk” by the Rare Breeds Survival Trust.

The latest British Pig Association survey (2014) showed there were a total of just 454 registered sows.